Russian gymnasts are at risk!

Russia has more at risk than two gold medals in the Rhythmic Gymnastics Individual and Group All-around at the Youth Olympic Games. Russian gymnasts got top prizes in both events in 2010 and all the nation is expecting gold in Nanjing.

Regardless of its notable predominance in Rhythmic Gymnastics, Russia is not ensured the top prize at the Youth Olympic Games. Gymnasts from Bulgaria and the previous Soviet Union republics will attempt to take the top places without any podium spots.

Russia’s Irina Annenkova will have the eyes – and weight – of the country on her as she competes in the Individual All-around event in Nanjing. The 15-year-old won gold in the Ball and Ribbon at the European Rhythmic Gymnastics Championships in June 2014.

However, Annenkova’s qualification to the Youth Olympic Games as the only Russian Rhythmic gymnast in the individual event was not without dispute. Another Russian gymnast, Iuliia Bravikova, won the Moscow Grand Prix in February 2014 and was also first in hoop at the European Championships. Whether Russia’s choice will pay off remains to be seen during the competition.

Mariya Trubach (BLR) won bronze at the Moscow Grand Prix, however, is eager to demonstrate she can achieve a better result. Her aces of trumps are the Ball and Clubs apparel. She got silver medals for both routines at the European Championships.

Bulgaria's Katerina Marinova could prove to be a serious comnpetitor. She was sixth in the All-around at the Moscow Grand Prix, however, she came fourth in Hoop and Clubs at the European Championships.

“In individuals, there are a lot of good kids at this age and it’s going to be very interesting,” said Marinova's coach Efrossina Anguelova (BUL). “At least six of the girls are almost at the same level.” 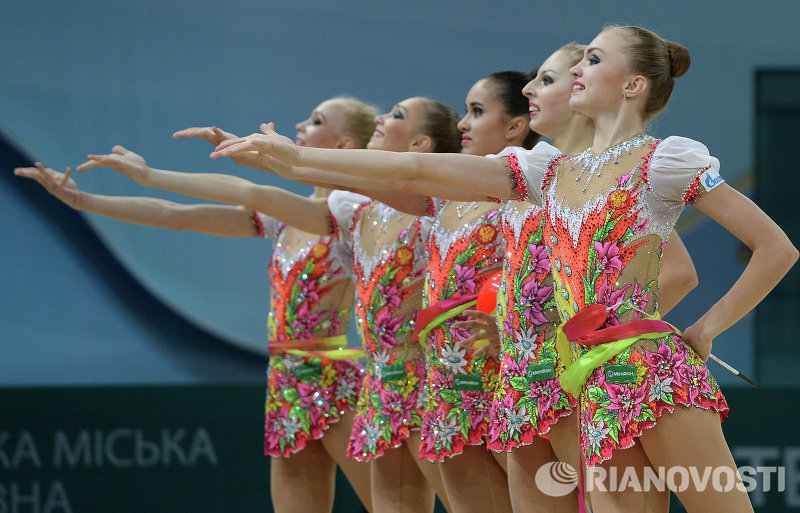 Yelizaveta Mainovskava (KAZ) and Anora Davlyatova (UZB) will be the ones to watch among the Asian contenders. At the Junior Rhythmic Gymnastics Asian Championships in February, Mainovskava was the All-around winner, and got silver in Clubs, and bronze in Hoop and Ball.

Davlyatova won silver in the All-around, silver in Ball, and bronze in Clubs and Ribbon, and will perform in Nanjing with programs that were developed in Russia’s Rhythmic Gymnastics center, Novogorsk.

“I am my own biggest rival,” Davlyatova said. “I need to overcome my abilities and do even more than I can.”

Russia’s dominance on the podium does not discourage her. “You can’t think about that,” Davlyatova said. “You need to think that you, too, can stand on the podium.”

Takana Tatsuzawa (Japan) also made success at the Asian Championships, taking gold in Ribbon and tying Davlyatova for bronze in Clubs, though she is not as strong with the other apparel, placing just 10th in the All-around.

Russia, Egypt and Canada won the medals in the group event at the 2010 Youth Olympic Games. All will be represented in the competition in Nanjing, with Russia once again cited as the top contender for the gold medal.

“They are very strong,” said Gyuzal Raymanova (UZB). “They have greater difficulties in their routines. But our advantage is that we are very expressive and nowadays, smiles and dances are becoming more and more important for judges.”

Groups from Uzbekistan and Kazakhstan will represent the Asian continent at the Youth Olympic Games after the Japanese team, which finished fourth in 2010, failed to qualify. These teams have the benefits of having coaches who are from Russia or are familiar with the successful Russian system of breeding strong Rhythmic gymnasts, and will try to use this knowledge to get an edge on their opponents.

Tradition could also prove an asset to the Bulgarian group of gymnasts, who will try to put on a show worthy of the country’s long history of gymnastics victories. < Be careful with items’ calculator!